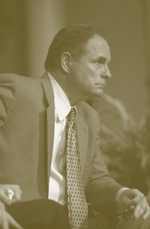 Gordon Poe was born in Longview, Texas on May 30, 1953. He was the first born son of Warren K. Poe and Hazel Poe. If you ask Bro. Gordon Poe about his childhood he would say “I was a normal child”, but if you asked those that knew him growing up they would say, “When that child set his mind to do something, he would do it.” One of the best stories from his childhood concerns his grandfather’s garage and a two- wheeled tricycle.

Bro. Gordon Poe’s grandfather Joe Poe was a successful inventor and mechanic. Mr. Poe was extremely careful that the concrete floor in his main garage was always clean. Nothing was allowed to damage the floor. Bro. Poe grew up around that garage because his parents lived in the upstairs apartment. Every day he would ride his used tricycle around and around the building. One day, for some reason, the wheel came off. At this point, his choices were very limited: he must quit riding the tricycle until it was fixed. After shedding some tears and sitting there for a while, he suddenly jumped up on the tricycle and pedaled off, leaving a trail in the dirt from the dragging axle. This was great, but his grandfather could not see him riding like this. He turned his little tricycle towards the garage, but when he got to the door he realized that he was about to get in trouble; he was going to mess up the floor of the garage with that dragging piece of steel that was once an axle. Did that stop him? Oh no. That determination kicked in and he jerked that tricycle up sideways on its two wheels and rode through the garage yelling, “Come outside, Papa! I want to show you how to ride a tricycle on two wheels.” After that, he never would allow them to fix his tricycle.

That determination would be something that would help him later in life. Bro. Poe’s life from his teenage years until November 1, 1987 was a turbulent time. He was successful at anything he put his mind to, he could not find the peace that he sincerely desired. Although his whole family was active in church in Longview, Texas, this man could not see that God would forgive him of all the things he had done in his past. What he didn’t know was that many people were constantly praying for him. On an invitation from his younger sister, Gordon and his girlfriend, Sherrie went to a revival service at Calvary Christian Tabernacle in Longview, Texas. Pastor A.D. Spears had on many occasions tried to get Gordon to church, but tonight would be different. Bro. Jerome Bourn was preaching that night, and without warning the Holy Ghost moved on Bro. Bourn; he pointed to the back where Gordon was sitting and began to speak as God directed him straight to Gordon. There was no doubt in Gordon’s mind that he had to make a move to the cross right then. He didn’t wait until an invitation was given. He stood and stepped to the end of the aisle. To his right was the back door and his old life, to the left was the altar and a new life. Satan said, “ Leave.” Jesus said, “Come.” As you can now tell, the only reason this web site is in existence today is simply because he obeyed the call of the Lord and went to the alter of repentance.

That night, November 1,1987, Sherrie and Gordon were filled with the Holy Ghost. On November the 4th they became husband and wife. The next two years Gordon sang in the choir, taught bible studies, played the bass, drums, and saxophone, sang in a men’s quartet, helped with the youth, taught Sunday school and did anything else Pastor Spears asked him to do. He was in a red-hot revival church and he was red hot for God. Gordon slowly began to feel a call on his life, but he did not understand the depth of what he was feeling. In his own words he stated “I just want to keep my job and help around the church.” Pastor Spears began to let him preach in the jailhouse and homeless missions, and Gordon now began to realize that this call was far deeper than he expected. One night in a powerful service, Pastor Spears pointed to Gordon and said “Come kneel by this pulpit.” When Gordon knelt where he was told, tears begin to roll down his face. He knew something from ancient days was about to happen. Pastor Spears then removed his own suit jacket and placed it upon the shoulders of Gordon and prophesied “The mantle of evangelism has now been placed upon you. You will reach the masses. As I traveled this country so will you.” The Holy Ghost then fell upon everyone. God had now made his call.

Over the years Bro. Poe has evangelized from coast to coast. In the last years he traveled over 100,000 miles in the air, preaching the gospel of the Lord Jesus Christ. Literally thousands have received the gift of the Holy Ghost. Thousands have been baptized in Jesus’ name. Thousands have received their healing in the revivals he has preached. Blinded eyes have been opened. People bound by wheelchairs have left those wheelchairs and walked. When you hear him preach you will understand why those that remember him from his childhood say that he was a determined child. You will know by the end of his message that he is determined to have a move of the Holy Ghost. If you are sick, he is determined that you will be healed. If you are lost, he is determined that you will be saved. If you are hurting, he is determined that you will be mended. In his own words Bro. Poe has stated, “If a man is really called of God to preach the gospel, then it is a death sentence for that man. The called man will love the people will all of his heart. He will walk among them with love, yet firmness. He will cry with them and laugh with them. His only purpose is to get them to heaven, which will require his life. It is impossible to do more than Jesus did for the people, yet it is not wise to try to do less.”

This man is always reaching out in every way he can. Several years ago he realized that many saints all over the nation had little idea what God is doing outside of their local assembly. To bring them closer together with each other he began to write a newsletter called Apostolic Truth. In this newsletter he addresses issue of faith, doctrine and writes on the miraculous power of Jesus’ Name. The newsletter has become quite successful as an instrument to bring saints attention to the awesome power of God all over this nation.

Bro. Poe is also the founder of the national crusades called Times of Refreshing. In 1998 he started the first crusade in Houston Texas. Now this crusade ministry reaches across this nation with eight crusades each year. Thousands have been healed from diseases such as headaches, cancer, multiple sclerosis bone cancer and other diseases. Ladies that could not bear children now have the miracle that they wanted running through their houses daily. Financial blessings have been witnessed by other that had lost all hope. Bro. Poe has also produced a magazine called Times of Refreshing which is a literary work full of pictures and articles of those that have experienced the power of the miraculous in his crusades.